The goal of this essay is to further explore what makes tokenized communities valuable.

Jess Sloss has said many times that "there will be billion-dollar communities on the internet." Some would argue there already are.

The goal of this essay is to further explore what makes tokenized communities valuable.

A tokenized community can drive three types of value:

Production value is the most straightforward. We can think about production value as the value of the products, services, and content that the community produces. Generally, tokenized communities begin with production value, whether it's content from a creator or some sort of tool to attract users.

For Forefront, this comes in the form of our media landscape including FF Newsletter and Journal, in addition to our products such as Marketplace, Terminal, etc. For Gitcoin, this is Grants and Bounty infrastructure.

Communities don't have to start with production value, though. FWB began as a token-gated group chat, and built products and services on top of that later down the line.

Regardless, production value is the most legible part of the economics of tokenized communities. It's what catalyzes the flywheel and gets people in the door.

Tokenized communities often feel like ponzis because they ignore production value and strictly focus on network and ownership Value. I won't go as far as to say that this model can't ever be successful, but it's really freaking hard to build a valuable network on the basis of a meme alone. For example, the vast majority of Supreme's value is derived from the brand (or meme) equity they've built, but they still need to sell clothes to be a valuable organization.

At the same time, if your organization is only driving production value, it's pretty pointless to tokenize. Traditional startups and businesses are much better models for building focused production value. If your only goal is to build a SaaS business, don't build a tokenized community.

Communities, on the other hand, are uniquely suited to build network value. Network value is centered around the common meme or mission: why are people here, and why should they interact with each other?

It is created when folks are forging relationships and building together toward propagation of the common meme. Network Value is the random projects that get spun out of a community's Discord. It's the reason you jetset to all of these conferences. It's not just about the vibes, it's the value of building cool stuff with your friends.

Any community can drive network value -- you still don't need to tokenize. We'll get to that in a bit.

Ownership value is created when the community has true power over treasury allocation and/or technical or social protocols. In other words, ownership value is the governance value of the token.

Most web3 communities today have limited ownership value. Members might theoretically have power, but in practice it is constrained by a core team with most of the real power to make and approve proposals. 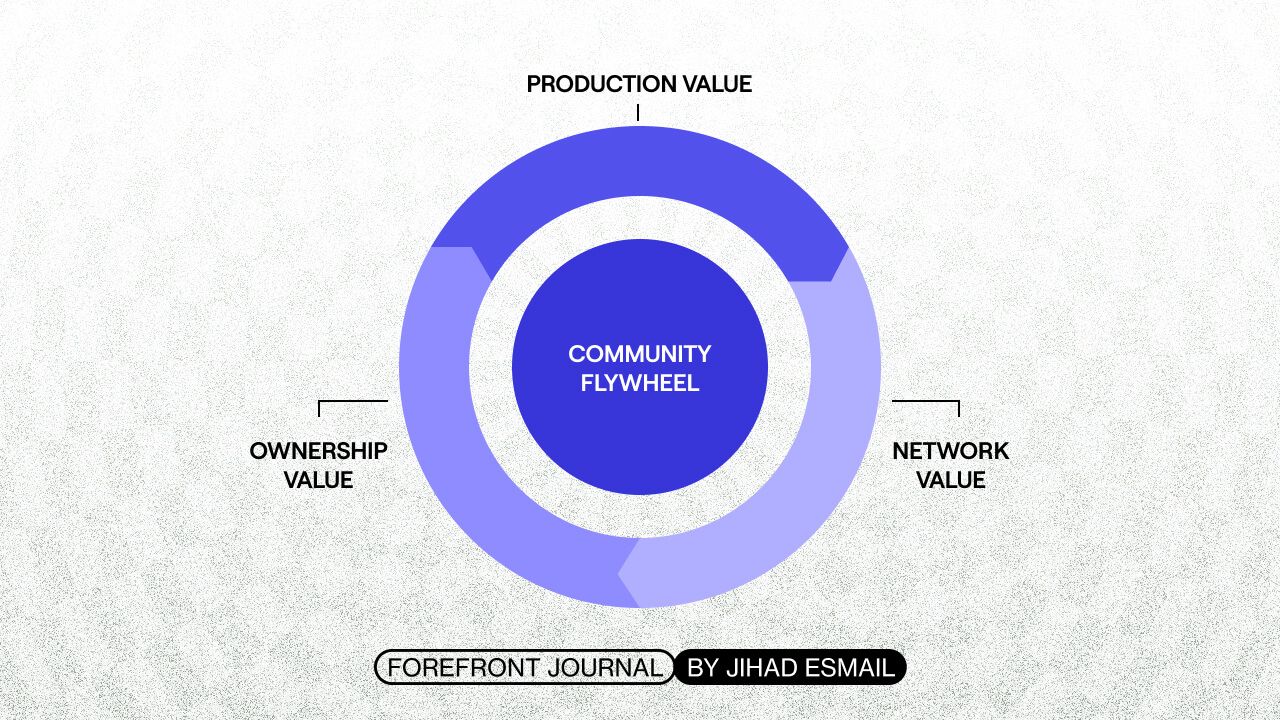 You don't need a token to drive production or network value. You might need one to drive ownership value, but that alone isn't enough to make a community valuable.

Instead, tokenized communities are valuable because of the way that these three forms of value flow into one another.

Consider this: some group of people (call them the "Train Core Team") comes together to develop a publication focused on trains. They charge $10/mo for a subscription (Production Value).

Train lovers rejoice -- this is the greatest train publication they've ever seen! So many incredible ideas about the history and future of these lovely modes of transportation. The core team makes a Discord or Telegram group for folks to meet, and groups begin to form to work on cool projects with other train-lovers (Production Value -> Network Value).

This is as far as most traditional communities go -- and that's not a bad thing! Maybe these community members found lifelong friends, thought partners, or even project co-founders. Maybe they co-authored essays or organized meetups. The community gets to enjoy some Network Value, but any organizational decisions and upside are held by the train core team.

Tokenized communities are different because they put tokens into the hands of community members to make real decisions (Network Value -> Ownership Value).

The community is then incentivized to allocate the treasury and make decisions to support new people and projects to enter the community and be built. (Ownership Value -> Production Value + Network Value).

Why? Owners are incentivized to "influence and spread the meme." They have control over how the meme is propagated (e.g. funding projects) and capture the upside as more people embrace the meme and want to have that ability.

And there we go -- the Tokenized Community Flywheel emerges.

Why isn't it working?

None of this is new, but it's a framework that really clicked for me. Tokenized communities are meme-focused capital allocation networks.

I know what you're thinking: there aren't many examples of communities that have successfully followed this model. Does it actually work? Or is it all just a pump-and-dump for early community members?

My (possibly naive) assumption is that the flywheel does work.

Nouns DAO is probably the purest example of this model today. Nouns are auctioned off daily, giving token-holders control over how the treasury is allocated. Despite the brutal bear market, it seems like the average winning auction price has actually increased over time.

Nouns are doing an incredible job of meme propagation, and are putting almost limitless power directly into the hands of token holders to manage the treasury. Individual projects might flop, but overall, it's hard to argue that Nouns isn't a successful organization.

The Nouns DAO treasury is massive, so it's easy to think that this model isn't feasible for every community. But that's just an excuse.

Complete community control over a small portion of the treasury is still better than intensely limited and bureaucratic "control" over the entire treasury.

Communities have experimented with lots of different revenue streams:

Each of these have pros and cons, some more than others, but the point still stands: without revenue, tokenized communities fail. A reminder from the previous piece:

"However, a key point to make is that fees/traditional pricing models aren't inherently bad, but they should be expansive: the value captured should be directly aligned with the value created. Economic models for tokenized communities should be viewed through the lens of creating value for the community rather than capturing value from the customer."

Tokenized communities are a fundamentally new type of organization. Sure, folks already have equity in startups they work for. Maybe they have decision-making power, too.

But companies are optimizing for work. Employees, whether they're technically "owners" or not, are labor.

The unique, killer feature of tokenized communities is the rapid incubation and funding of community-led projects.

Tokenized communities turn members into entrepreneurs, creating a network of projects, products, companies, and sub-communities that are working toward propagating a common meme or mission.

We still have lots to learn. This thesis will almost definitely evolve as we test these assumptions and experiment with more community models.

Until then, I'll be evaluating tokenized communities based on how well they can fund people to build cool, values-aligned stuff with their friends.

Weekly updates straight to your Inbox