Rise of The Collector Economy: How Crypto is Reinventing the Music Industry

In this essay, Javi Park breaks down the Collector Economy and explains how different "levels" of collectors will continue to grow and make an impact on artists around the world.

This is a guest essay from Javi Park, co-founder and CEO of Reamp.xyz: the home base to discover, listen, and collect Music NFTs.

Special thanks to Jeremy, Sweets, Ana, Eshita, Azeem, Jihad, and Xaine.eth for editing and shaping this story. 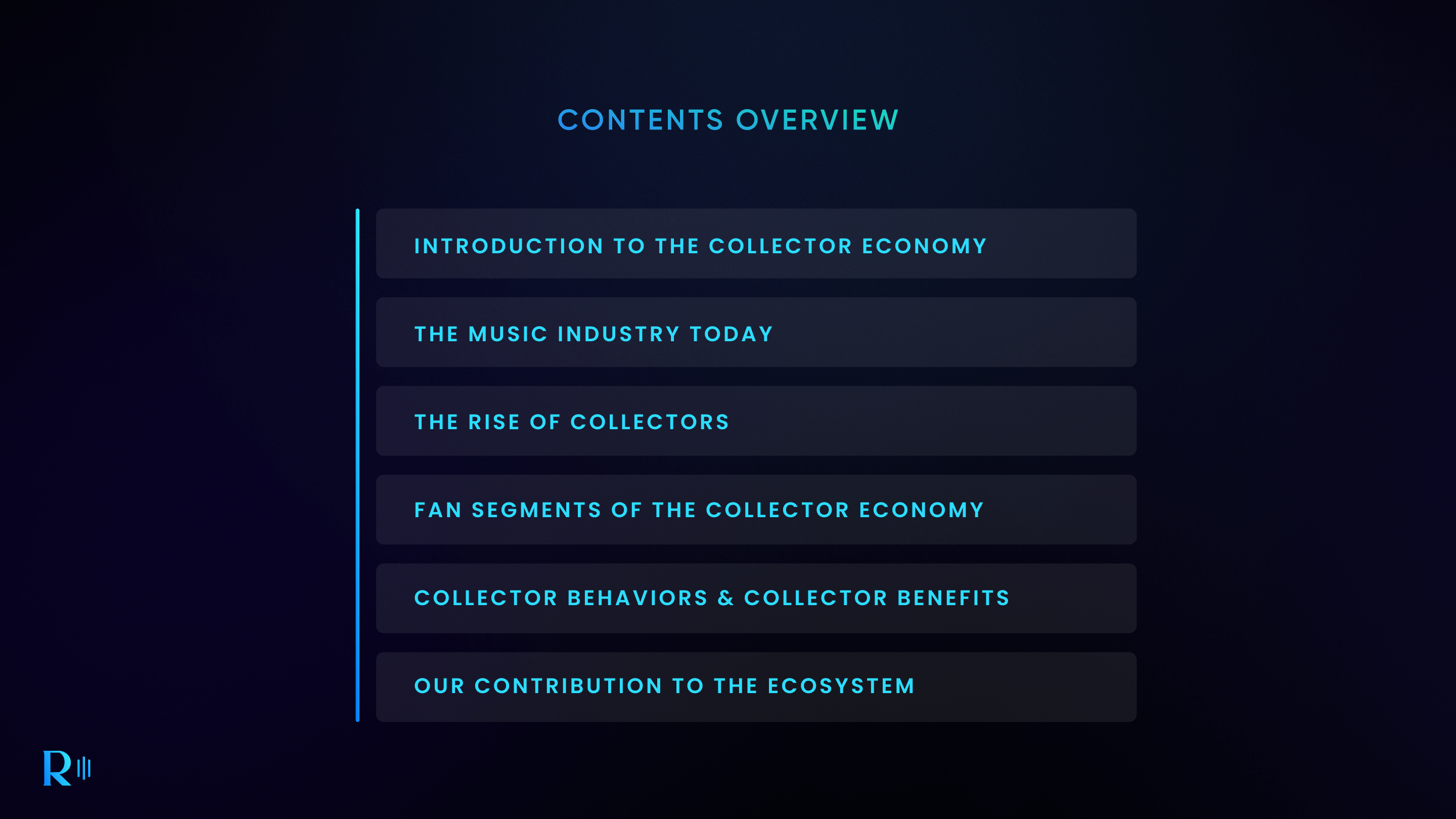 Introduction to The Collector Economy

Inspired by Ana Andjelic's Introduction to The Collector Economy, who first surfaced the idea in late 2021, she elegantly cites key differences between buying and collecting:

In contrast to the traditional economy, the collector economy recognizes that taste is socially created, and that a community creates consensus on the value, rarity and desirability of a collection. Our digital wallets and social media accounts make us all collectors, and turns our collections into capital traded in social, cultural, and economic currency[1].

Ana highlights an emerging digital segment known as "Collectors" that arise with the introduction of non-fungible tokens (NFTs) and illustrates new behaviors that develop as a result of popular collections like Bored Ape Yacht Club. Though Music NFTs were not as prevalent at the time of her introduction, we believe the biggest market for collectors will emerge in digital music. 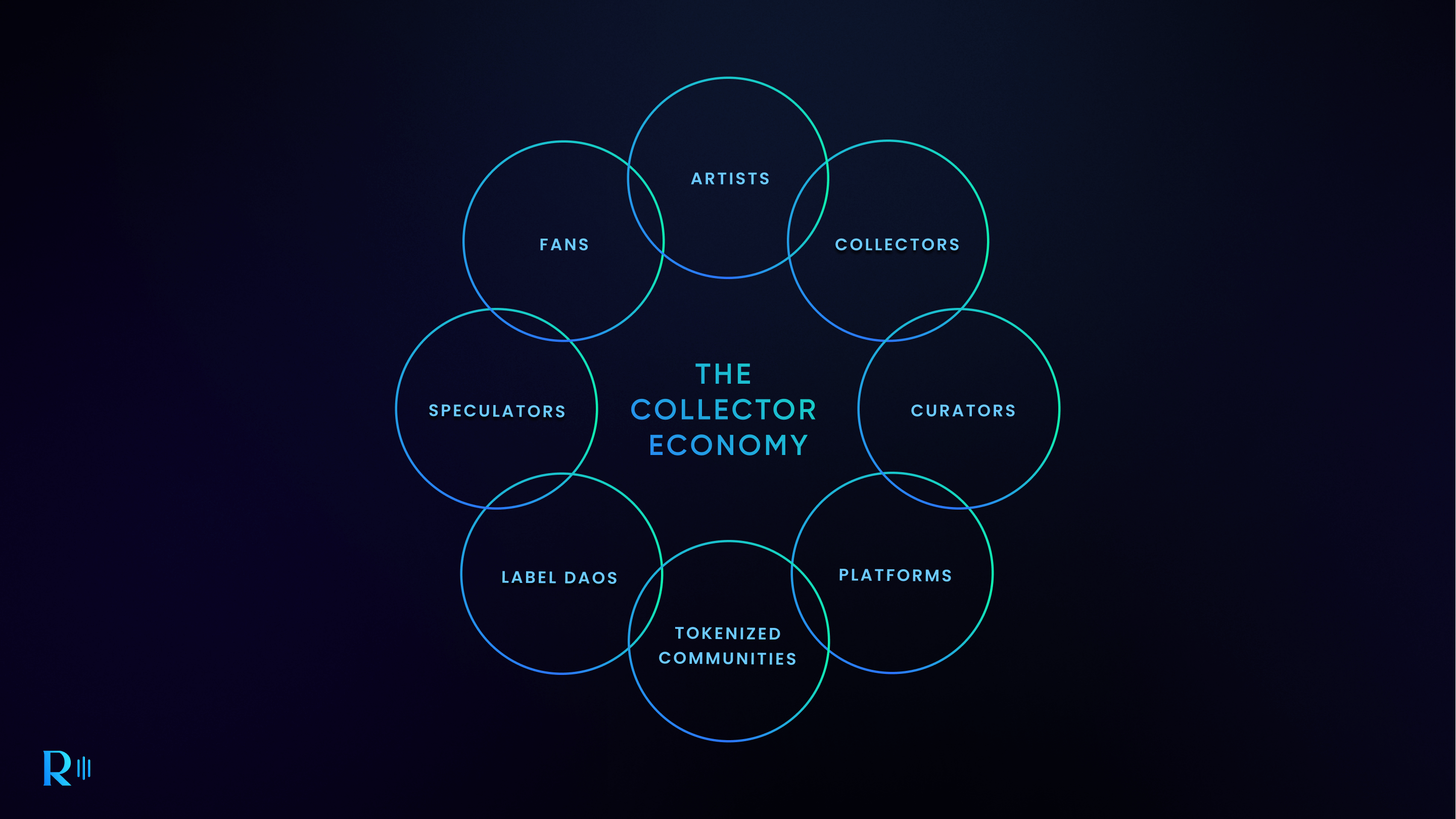 Artists, Fans, Collectors, Curators, Speculators, Label DAOs, Tokenized Communities, and Platforms are the eight groups that make up The Collector Economy --- each group plays an integral role within the ecosystem. Artists are the heartbeat of The Collector Economy. Collectors enable the system to flourish. Label DAOs discover and develop artists. Fans, communities, curators, and speculators proliferate the stories, and platforms facilitate the relationships. In this piece, we'll focus on Music NFT Collectors through a social, economic, and behavioral lens. We'll discuss the remaining groups in a future piece.

The Music Streaming Model is Broken

The unit economics of streaming platforms remain unprofitable after more than a decade, and as a result, most artists are unable to make a living from digital music [3]. Today, an artist needs 3,500,000 streams to earn a minimum wage salary in the U.S - or about $15,000 USD a year [4]. This estimate is before labels, management, and distributors take their commission, which can typically range from 50% to 80% [5]. To maximize ad revenue, platforms pay artists in developing cities less than artists who live in larger, wealthier cities for the same number of streams [6]. The sad reality is that music streaming does not align incentives for those involved in the ecosystem and is therefore not sustainable.

To be fair, this is not entirely the streaming platforms' fault. The rules of the modern music industry were designed by labels and publishers nearly a century ago in 1925, and over time more middlemen have plugged into the system making it nearly impossible for most artists to make a living off their music [7]. Emerging technology like NFTs flip the economics of music creation and consumption by removing intermediaries and enabling artists to get paid directly by fans, creating new markets for music that have never before existed [8].

The Rise of Collectors

An emerging segment of digital music enthusiasts, known as Collectors, are the group responsible for creating the most amount of value for artists. Fans who have purchased a vinyl record, CDs, concert tickets, artist merch, or attended a music festival have the traits of a collector - they just haven't been presented with a compelling reason to collect music digitally yet.

In 2021, total sales of music NFTs reached $86 million and the market has continued to expand since, even during a significant decline in NFT sales. Independent artists accounted for the majority of sales (64%), while major-label artists accounted for the remainder (36%) [9]. Iman Europe, an LA-based singer-songwriter, has earned 22.2 ETH (~$30,000 USD at the time of writing) by selling five singles and a music video as NFTs since November 2021. Nearly 40% of her NFT revenue was made on secondary sales, where she receives a 10% cut of each resale in perpetuity [10]. Collectors have played a direct role in giving Europe and hundreds of other artists the opportunity to find a new source of revenue within the web3 music ecosystem - and we expect this trend to continue. 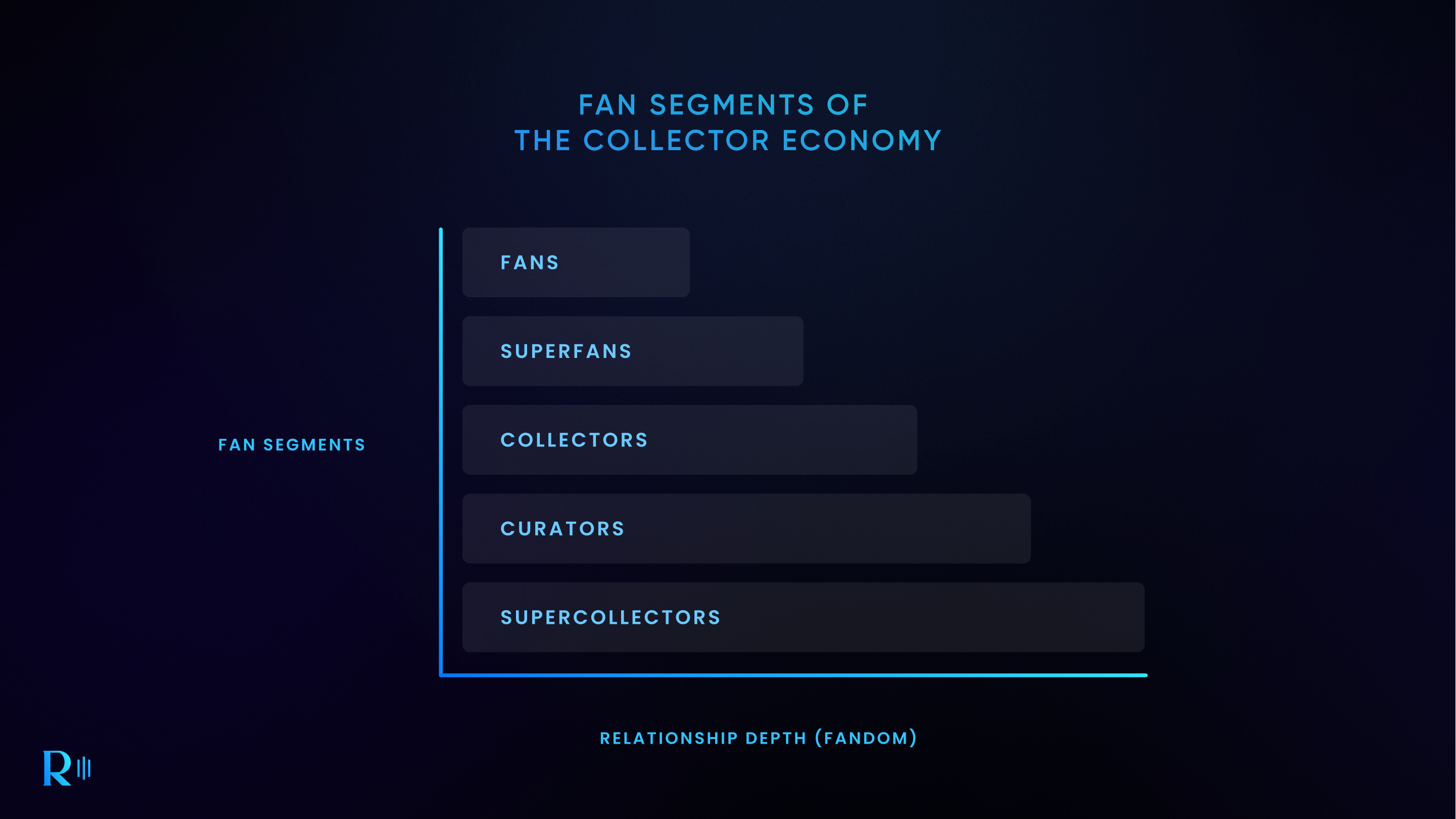 Fan Segments of The Collector Economy

Fans are categorized across five segments: Fans and Superfans are active music listeners but have not been introduced to Music NFTs yet. Collectors, Curators, and Supercollectors are crypto-native and have collected at least one Music NFT. These segments can be viewed as a fandom progression, where fans move across each segment as artists give fans reasons to collect their music. Ordered from lowest-fandom (1) to highest-fandom (5) the fan segments are as follows:

Everyone has a different reason for collecting. A large number of collectors do so to support their friends, similar to patronage. Others have an eye for talent and see the potential for value accrual, while others collect to display their curatorial sensibilities. We expect the behaviors of the future to be radically different from what we're seeing today as artists begin to introduce one-of-a-kind digital and physical experiences. In a world of infinite digital possibilities, it's up to artists to dream up creative ways to rethink what it means to offer a memorable experience for collectors. It's not about offering "utility", it's about offering Collector Benefits.

The value of music is also changing. It's almost nonsensical to assume the value of all music will remain a $10 per month subscription. In fact, listening to music will be free for everyone - without ads. Thanks to Music NFTs, the value of each artist's music will be predicated on their talent, discipline, and consistency and be valued independently. For the first time ever, artists get to write the rules of how their music is valued and will no longer depend on the 0.003 cents per stream offered by traditional platforms. In this new era, streams become a social and cultural indicator and the true value of music is driven by the number of collectors, curators, and supercollectors willing to become a member of an artist's community.

The Collector Economy is not only a self-sustaining system with individual actors, groups, and behaviors that produce value - it's also a movement. A movement of rebirth and reinvention. Similar to how the Italian Renaissance ignited the imagination of a new generation of artists, crypto gives rise to the golden age of the internet. The brief period of time when we couldn't own digital assets will be seen as the stone age of the internet, considered strange by future generations. 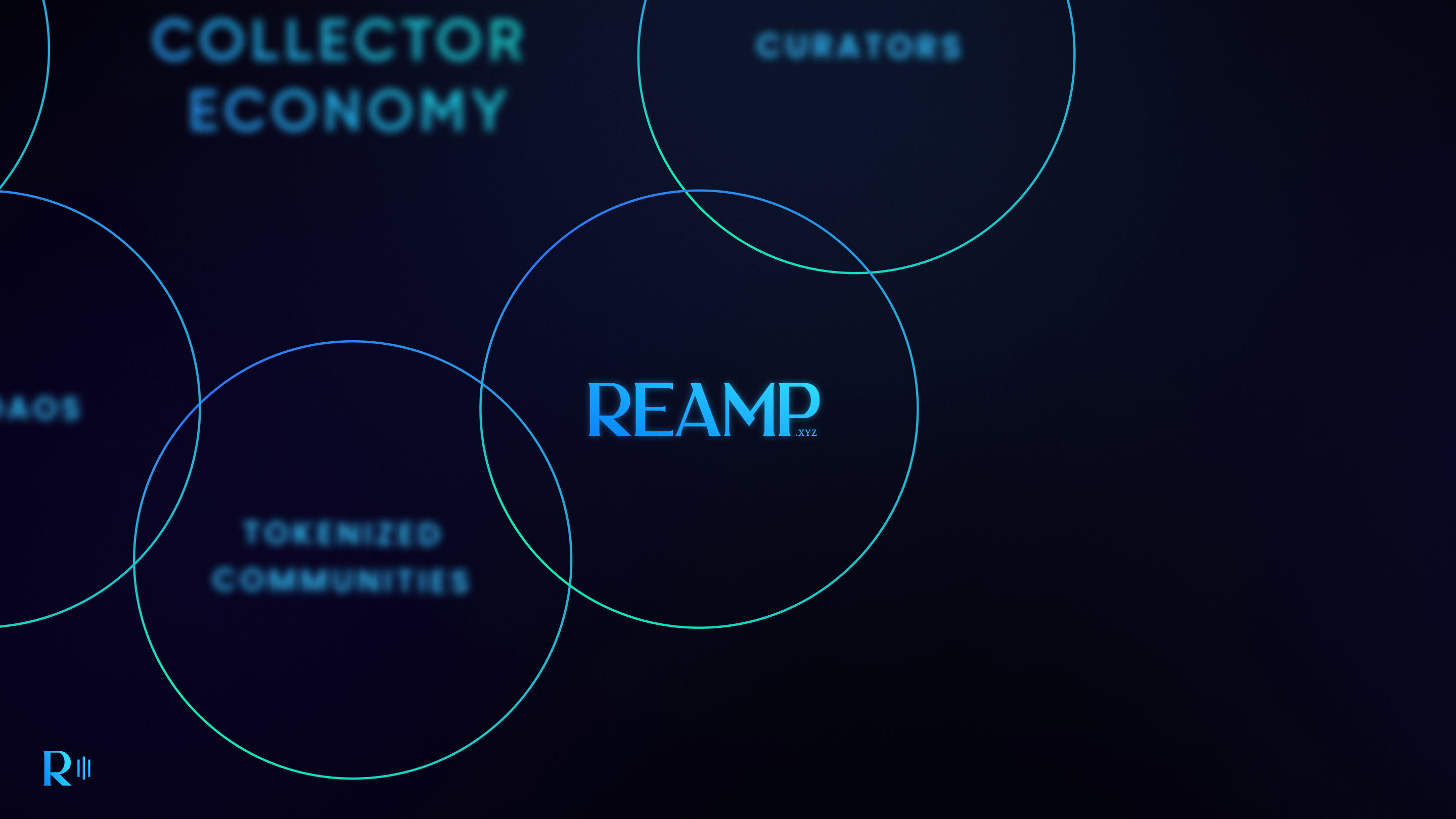 Our Contribution to the Ecosystem

We now have the opportunity to experiment with concepts like ownership, rights, proof of early support, direct access, value appreciation, live experiences, and other experiments that will shape how music is valued and enjoyed. At Reamp.xyz, we plan to champion The Collector Economy by building the home base to discover, listen, and collect Music NFTs and give artists the opportunity to finally make a living through digital music.

We're on a mission to reach 100 million collectors by 2027. We'll achieve this by telling compelling stories designed for fans and superfans on why The Collector Economy is the most beneficial movement for artists since the invention of the vinyl record. This is an open invitation for artists, fans, collectors, curators, and partners to join us on an adventure; an adventure of inspiring the world on why collecting is the most fun, enriching, and sustainable way to experience music.

→ Join the waitlist to be the first to try Reamp

*The Collector Economy transcends music into a variety of mediums like video, fashion, writing, podcasts, and digital art. We expect there will be forks of this movement, each with its own corresponding segments and set of behaviors.

Weekly Newsletter straight to your Inbox

In this essay, Azeem Khan reflects on his experiences in the music industry and web3 and asks what it will take for Music NFTs to have their breakout moment as they steadily gain popularity amongst creators.

Forefront Journal publishes essays from the frontier of web3 social and tokenized communities. This is a guest essay from Mashal Waqar.